If tourism was hit hard by the pandemic, short-term rental did not follow this trend. In 20 months alone – from March 2020 to October 2021 – the number of requests for opening new properties was more than twice as high as the number of requests for termination, according to data from Turismo de Portugal. This shows that the sector, although it has been greatly affected by the absence of tourists, has not lost strength and continues to be an important source of income for many owners of touristic properties.

In 20 months of the pandemic, there were 4,936 requests for termination of the activity and 11,752 new registrations. City tourism, more dependent on foreigners, suffered the biggest drop. The interior, on the other hand, with offers adapted to a life without major contacts, gained new impetus.

In fact, we talked previously about the significant increase in rural tourism in Portugal. Learn more about this trend at this link.

For LovelyStay, a leading touristic accommodation management company in the country, the numbers are backed up by 2021 results. “Our customer retention rate was sky-high, far beyond what was expected, as we are still experiencing a time of great uncertainty. In addition, we reached the important milestone of over 450 properties in our portfolio, exceeding any expectations. This achievement shows that a well-defined strategy and a prepared team can overcome any challenge”, celebrates the Head of Business Development, Miguel Marinho Soares.

Also according to the information presented by Turismo de Portugal, the number of short-term rental in Lisbon, highly dependent on foreign tourists, was the one that suffered the most from the pandemic. The district is the only one in the continent, in the analyzed period, to have a higher number of closings than new registrations: 1,397 against 1,349. This is a minimal difference, but when compared to the numbers in the city of Porto, for example, it helps to demonstrate how the pandemic affected with more intensity the dynamics of the capital and its surroundings – also taking into account the containment areas of Lisbon that prevent the issuing of new licenses. The district of Porto had 1673 new registrations and 964 requests for cessation of activity.

Still, during this whole crisis, the biggest surprise was tourism in the countryside. Confinement, isolation, and teleworking were three of the words that became part of everyone’s day-to-day life. This is also true in the everyday life of short-term rentals. The proof is in the numbers of new registrations in inland districts of the country. The data shows that for every closing, there were 20 to 40 times more openings in Bragança, Guarda, Portalegre, and Vila Real.

“It’s proof that during the covid-19 period, the interior was a market with a positive balance. Not only because short-term rentals fit with the idea of a home of one’s own, isolated. It was also because people were not traveling abroad, domestic tourism grew. Many have discovered spectacular things here,” Eduardo Miranda, president of the Association of Short-term Rentals in Portugal (ALEP) tells CNN Portugal.

Find out the variations in the number of short-term rentals from district to district: 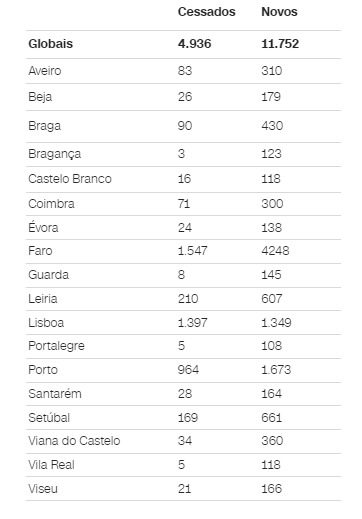 December has come and the streets are already lit up, the houses have their Christmas trees up and a lot of shops are in a Christmas spirit as well. Even with the coming of Winter, Read more…

Medium-term rentals: get to know this LovelyStay service better

Autumn in Porto: enjoy the city this season

We have entered November and are in the middle of Autumn. In this season, rain becomes more frequent, the winter coats start to get out of the wardrobe, and the days become shorter. Even so, Read more…